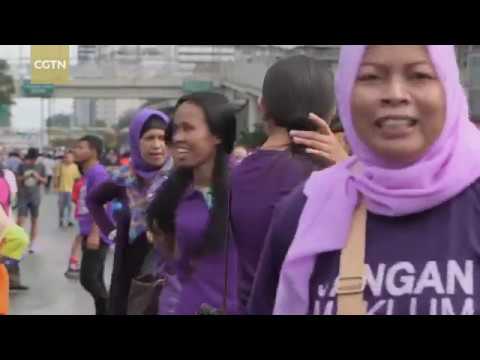 One of the greatest fears most people don’t speak about is cognitive decline and dementia. How do they cope in Malaysia, Singapore and Indonesia?

The World Health Organization (WHO) has just released its guidelines about how people can address this fear and reducing their risk of dementia. Believe it or not, it’s as simple as:

And who’s a poster model for this? Malaysia’s and the world’s oldest Prime Minister Tun Dr. Mahahir Mohammad, of course! At the age of 93 years young, Tun M as he’s fondly known to Malaysians, said this, “I would advise people not to rest when they grow old because if you rest, you will soon become very weak and incapable, and may become senile. Be active after you reach retirement age.

The brain is the same. If you don’t use your brain, you don’t think, you don’t read, you don’t write, the brain regresses and you become senile. So always be active,” Tun M advised.

In the press statement issued on 14 May 2019 from its Geneva headquarters, WHO Director-General Dr Tedros Adhanom Ghebreyesus shares that in the number of people with dementia is expected to triple in the next 30 years. “We need to do everything we can to reduce our risk of dementia. The scientific evidence gathered for these Guidelines confirm what we have suspected for some time, that what is good for our heart, is also good for our brain.”

WHO’s Global Dementia Observatory, launched in December 2017, is a compilation of information about country activities and resources for dementia, such as national plans, dementia-friendly initiatives, awareness campaigns and facilities for care. Data from 21 countries, including Bangladesh, Chile, France, Japan, Jordan and Togo, have already been included, with a total of 80 countries now engaged in providing data.

Creating national policies and plans for dementia are among WHO’s key recommendations for countries in their efforts to manage this growing health challenge. During 2018, WHO provided support to countries such as Bosnia and Herzegovina, Croatia, Qatar, Slovenia and Sri Lanka to help them develop a comprehensive, multi-sectoral public health response to dementia.

An essential element of every national dementia plan is support for carers of people with dementia, said Dr Dévora Kestel, Director of the Department of Mental Health and Substance Abuse at WHO. “Dementia carers are very often family members who need to make considerable adjustments to their family and professional lives to care for their loved ones. This is why WHO created iSupport. iSupport is an online training programme providing carers of people with dementia with advice on overall management of care, dealing with behaviour changes and how to look after their own health.”

Dementia is an illness characterized by a deterioration in cognitive function beyond what might be expected from normal ageing. It affects memory, thinking, orientation, comprehension, calculation, learning capacity, language and judgement. Dementia results from a variety of diseases and injuries that affect the brain, such as Alzheimer disease or stroke.

Dementia is a rapidly growing public health problem affecting around 50 million people globally. There are nearly 10 million new cases every year. Dementia is a major cause of disability and dependency among older people. This is a rampant non-communicable disease (NCD) and inflicts a heavy economic burden on societies as a whole, with the costs of caring for people with dementia estimated to rise to US$ 2 trillion annually by 2030. The increasing numbers of people with dementia, its significant social and economic impact and lack of curative treatment, make it imperative for countries to focus on reducing modifiable risk factors for dementia. Action area 3 of the Global action plan on the public health response to dementia 2017–2025 is risk reduction. Download the global action plan here.

Some highlights from the plan on the areas for action include: increasing prioritisation and awareness of dementia; reducing the risk of dementia; diagnosis, treatment and care; support for dementia carers; strengthening information systems for dementia; and research and innovation.

This topic has recently been covered by The Star newspaper in Malaysia, “Dealing with Dementia”.

And also in Singapore, their Ministry of Health website addresses citizen’s concerns about the ever rising occurrences of dementia in elderly folks. Find out more about dementia signs here.

The video above, is inspired courtesy from Indonesia’s popular poco-poco dance. Some believe this helps prevent Alzheimer’s and other forms of dementia by stimulating the brain. In the CGTN news channel video description, they share that Alzheimer’s affects the elderly, has no cure and experts have been looking for ways to prevent it.