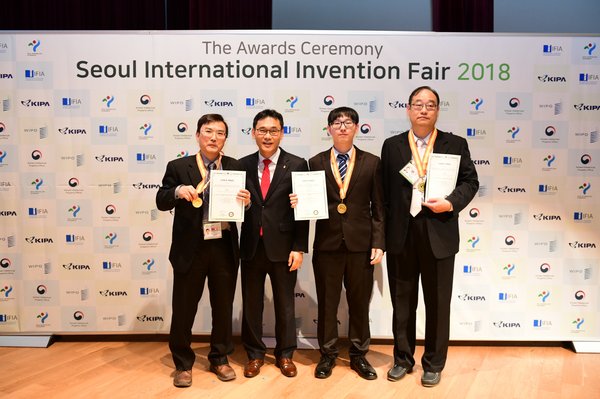 – 606 inventions from 33 countries, including France and the U.S.A.

-10 grand prize winners with one invention related to oral antibiotics Lee Du-seong, the acting president of KIPA, with the Grand Prize winner from Taiwan Far East University at the SIIF 2018 awards ceremony.

SIIF 2018, which celebrated its 14th anniversary this year, is the largest annual international invention event in Asia and is supported by the World Intellectual Property Organization (WIPO), the International Federation of Inventors’ Associations (IFIA), and other patent information and technology transfer agencies.

An impressive total of 606 inventions from 33 countries including France and the U.S.A. were featured at this year’s event. Winners were chosen after an on-site evaluation which took place on December 6 and 7.

One of the ten grand prize winners of this year’s festival is ‘MANG.ID’, an invention by Naufal Alman Shafly and nine other team members from the University of Brawijaya in Indonesia. ‘MANG.ID’ is an online application that helps market the products of small and medium enterprises (SME) in Indonesia.

Other nine other grand prize winners are:

Various commercial and promotional opportunities were made available to the SIIF 2018 inventors, including information on the latest technology trends, technology transfer, and investment consultations.

Lee Du-seong, acting president of the Korea Invention Promotion Association, stated, “SIIF 2018 revealed a bright future from the technological innovation displayed in the inventions from the world,” also adding,”KIPA will work harder to provide quality support to inventors through close cooperation with invention institutes and organizations around the globe.”