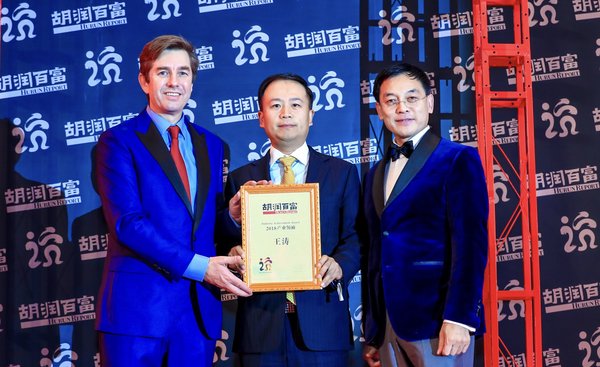 BEIJING, Nov. 3, 2018 /PRNewswire/ — The 2018 Most Respected Entrepreneurs Awards Dinner, an event hosted by Hurun Report each year, was held in Beijing on 2 November 2018. Mr. Wang Tao, the Chairman and CEO of Ping An Good Doctor was awarded the “2018 China Industry Leader of the Year” award for his innovative achievements in internet healthcare in 2018. Mr. Wang was the only person in the medical and healthcare sector to receive the honor this year. “The China Industry Leader of the Year” award is an assessment by Hurun Report on the influence of Chinese business leaders during the year. It is a highly regarded award that honors entrepreneurs who have made outstanding contributions in their own sectors or regions. The selection criteria includes sense of social responsibility, influence and innovative ideas. Hurun Report’s awards pay tribute to outstanding figures in various industries that have influenced society and instigated change.

Mr. Rupert Hoogewerf, the Chairman and Chief Researcher of Hurun Report, said in his speech that Mr. Wang has turned Ping An Good Doctor into a leading, innovative company in the Chinese and global medical and healthcare sector in just four years. The company uses the “Internet +AI” model to benefit its 228 million users, providings convenient and quality one-stop healthcare services. On 4 May 2018, Ping An Good Doctor became the first listed internet health-tech company in the world when it joined the Hong Kong Stock Exchange. The public offer shares were 653 times oversubscribed. Its listing has had a profound impact on the future development of China’s healthcare industry.

Continuous innovation makes it the No.1 internet health-tech company

Mr. Wang recently said: “Our vision is to provide every family with a family doctor, every person with an e-health profile and everyone with a healthcare management plan.”

Since the beginning of this year, the business of Ping An Good Doctor has developed rapidly. The enterprise-managed medical insurance plan has signed contracts with nearly 200 large enterprises, including Vanke, Greentown, Bank of China and Evergrande Group, serving nearly 1.5 million employees. The service network of “One-minute consultation + One-hour delivery” has covered more than 80 major cities in the country, including Beijing, Shanghai, Guangzhou, Shenzhen and more than 10,000 cooperative pharmacies.

At the same time, Ping An Good Doctor’s “AI Doctor”, built by using the big data of more 300 million online consultations, has been used in smart hospitals, Chinese medicine “Modern Physician Hua Tuo” and “One-minute Clinics”, which reduce the rate of misdiagnosis of traditional medicine and improve the efficiency of medical resource usage, accurately matching the needs of doctors and patients, and maximizing the doctor’s workflow. So far, “AI Doctor” has entered more than 100 top three hospitals in China, including the 303th Hospital of the Chinese People’s Liberation Army, Qingdao Eye Hospital, the First Affiliated Hospital of Jinan University and the Third Affiliated Hospital of Southern Medical University.

While the business continues to grow, Ping An Good Doctor has also actively promoted its internationalization strategy and has established a Southeast Asian international joint venture with Grab. With Grab’s strong online user base and advantages in Southeast Asia, Ping An Good Doctor’s quality medical services and AI technology can be exported to more people, opening up the Southeast Asian internet medical health market with hundreds of millions of users, and laying a solid foundation for the establishment of “the world’s largest healthcare ecosystem circle”.

Ping An Good Doctor recorded a revenue of RMB1,123 million for the first half of 2018, representing a year-on-year increase of 150.3%. Among which, the family doctor services business, the core business of the Company, recorded a revenue of RMB186 million, representing a year-on-year increase of 91.4%. As of the end of 30 June 2018, Ping An Good Doctor’s mobile application gained 228 million registered users (RU) and had 48.6 million monthly active users, making it the most popular mobile healthcare mobile application in China. According to the “Active Medical App in July 2018” released by Analysys, a well-known internet data research institute, the monthly active users (MAU) of Ping An Good Doctor’s App is almost double that of the total MAU of the other Apps ranking from second to tenth on the list. Ping An Good Doctor’s MAU is approximately six times greater than the App ranking second on the list, outpacing other competitors in terms of market share in the internet medical field.

In addition to leading the Company to outstanding results performances and being widely recognized by the industry, Mr. Wang has also launched an innovative initiative to improve rural medical and health services with “Internet + AI” in social welfare undertakings.

In order to solve the problem regarding lack of medical treatment in the remote mountainous areas and the vast rural areas, Ping An Good Doctor has employed its leading medical technology, “AI Doctor”, to provide village doctors with a series of products to help with poverty alleviation such as testing machines, multi-scenario remote training and doctors to help more than 10,000 rural doctors in poverty-stricken and remote areas in Guangxi, Jiangxi, Inner Mongolia and Chongqing. This initiative improves the capacity of rural medical services and the health of farmers in these areas.

“China’s best medical resources are often in the first-tier cities such as Beijing, Shanghai and Guangzhou, while many county-level cities and mountainous areas suffer from a lack of medical resources. It is very painful for people to travel a long way for medical treatment. Now, we will solve the dilemma of uneven distribution of medical resources by using the internet. This will help patients in small towns such as Guizhou and those in Xujiahui District of Shanghai to enjoy the same medical resources.” Mr. Wang said in a media interview.

Ping An Good Doctor is the leading one-stop healthcare ecosystem platform in China. By combining “mobile health + AI technology”, the Company strives to provide every family with a family doctor, every person with an e-health profile and everyone with a healthcare management plan. Ping An Good Doctor has established a comprehensive, one-stop healthcare ecosystem covering family doctor services, consumer healthcare services, a health mall as well as health management and wellness interaction.

As of the end of June 2018, there were 228 million registered users and the Company’s MAU reached 48.6 million. Ping An Good Doctor is today the largest mobile medical application in China in terms of user scale. Ping An Good Doctor employs more than a thousand medical personnel (Assistant Supervisor Level or above from Class III Grade A Hospitals) in its in-house medical team and contracts with 4,650 renowned external doctors. This in-house medical team, empowered by our proprietary AI technology, provides users with 24 x 7 online consultation services. In our offline partnership network, Ping An Good Doctor collaborates with approximately 3,100 hospitals (including more than 1,200 Class III Grade A hospitals) to provide services such as hospital referral, appointment and inpatient arrangements. Ping An Good Doctor also partners with more than 2,000 healthcare institutions, including physical examination centers, dental clinics, cosmetic surgery institutions and more than 10,000 pharmacy outlets, to provide relevant health and wellness services to our users. By integrating our AI-empowered medical team, external doctors and offline network, Ping An Good Doctor has established a closed-loop healthcare ecosystem which enables our users to enjoy online consultations and online drug purchases, as well as online consultations and offline follow-up treatment, thereby providing convenient, high-quality and efficient family doctor services.

In April 2015, the App “Ping An Good Doctor” was officially launched. In May 2016, the Company completed an A round financing and raised US$500 million. In December 2017, the Company completed the pre-IPO financing from Softbank Vision Fund, during which it raised US$400 million. On 4 May 2018, Ping An Good Doctor became the No.1 listed internet health-tech company in the world when it joined the Hong Kong Stock Exchange, stock code 01833.HK. Our IPO cornerstone investors include Blackrock, Capital Group, GIC, Canada Pension Plan Investment Board, Khazanah Nasional Berhad, Swiss Re and CP Group.