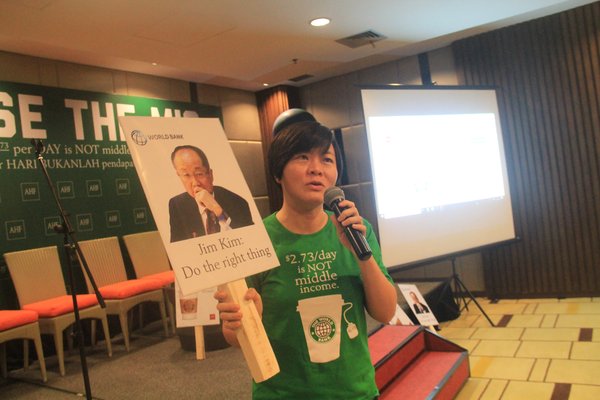 Marie Ko delivered a campaign about Raise the MIC during a press conference in Nusa Dua, Bali, Indonesia.

Riki said that international funding for HIV/AIDS treatment in developing countries, including Indonesia, was recently reduced. This happened because the World Bank imposed a new classification on Middle Income Country (MIC). The World Bank sets a country where people earn US$ 2.73 per day, or about as much as the price of a cup of coffee in many countries, is not included in a group of poor countries.

“In fact, donor agencies or institutions, such as the Global Fund to Fight AIDS, Tuberculosis and Malaria, uses the World Bank income scales to determine the countries eligible for their funding,” said Riki.

Considering Indonesia belongs to the MIC category, Riki added, international aid for Indonesia has shrunk and this has worsened the handling of HIV/AIDS in this country. All this time, as much as 80% of funds for handling HIV/AIDS in Indonesia come from outside. “Because we are now considered to be rich, other countries and funding agencies stop their support,” said Riki.

Therefore, during the Annual Meeting of the World Bank and International Monetary Fund (IMF) in Nusa Dua, Bali, 8-14 October 2018, AHF calls on the World Bank to change its policy regarding the classification of middle income countries (MIC).

AHF, among others, pursues creative ways to campaign for the need to change the country classification by distributing “World Bank Coffee” for free around the arena of the annual meeting of the World Bank – IMF in Nusa Dua. In the cup is written “$ 2.73 per day is not middle income“.

“AHF is asking the World Bank’s attention through coffee, because 2.73 US dollars is equivalent to the price of a cup of coffee,” said AHF Asia Advocacy and Marketing Manager, Marie Ko.

The reduced funding for handling HIV/AIDS in Indonesia is indeed a big concern, considering the fund needed for HIV/AIDS treatment is quite large. According to an activist of the Indonesian Family Planning Association (PKBI), Muvitasari, this year Indonesia needs Rp 4.2 trillion to deal with HIV/AIDS. The funds come from the APBN, APBD, CSR, various aids and fundings   from international donor agencies.

Therefore, AHF continues to urge the World Bank to rectify its classification method regarding MIC. “The World Bank must re-calculate about MIC,” said Riki.

AHF is a non-profit organization based in Los Angeles, United States. AHF currently provides care or medical services to more than 1 million people with HIV/AIDS in 41 countries, spread across the US, Africa, Latin America, the Caribbean, Asia Pacific, and Eastern Europe.