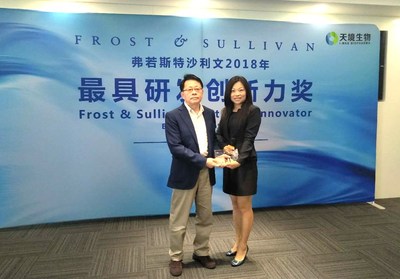 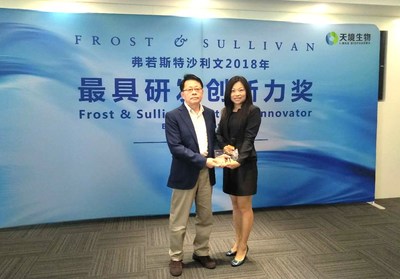 The “2018 Best R&D Innovator (Biopharma Category)” from Frost & Sullivan is in recognition of I-Mab’s significant achievements and outstanding capabilities in the areas of biologics R&D and innovation. After in-depth interviews, industry analysis, and secondary market research, Frost & Sullivan team nominated a group of competitive and outstanding companies to an independent panel of reviewers. The panel, composed of third-party investment experts, financial experts, investment bankers and well-known entrepreneurs from publicly listed companies, conducted a rigorous review of the nominated companies and decided to give the “2018 Best R&D Innovator (Biopharma Category)” award to I-Mab.

I-Mab is dedicated to developing transformational medicines to address unmet medical needs and improving the lives of patients. As an innovative biopharmaceutical company, I-Mab has an exclusive focus on biologics with first-in-class and best-in-class potentials. Since its establishment in 2014, I-Mab Biopharma has quickly demonstrated its research and development advantages in the therapeutic areas of immuno-oncology and autoimmune diseases. The advantages result from the application of I-Mab’s efficient R&D model, which relies on its own in-house core discovery and development capabilities and is complemented strategically and effectively by CROs of global standards. I-Mab’s R&D core competencies cover the whole R&D spectrum, including discovery, CMC, pre-clinical development and clinical development stages. I-Mab has successfully established a diverse set of antibody platforms including antibody-cytokine fusion proteins, bi-specific antibodies, Hy-Fc proteins and monoclonal antibodies. After four years’ development, I-Mab now has more than 10 biologics assets with global or China first-in-class and best-in-class potential, of which 4 globally in-licensed products have entered clinical phase II/III trials, and other 3 global products will enter clinical trials in the U.S.

I-Mab adheres to China’s innovation-driven strategy by continuing to invest in R&D and talent acquisition. I-Mab’s outstanding R&D and innovation capabilities, as well as the corresponding achievements, have received endorsement of many top-tier investors.  From mid-2017 to 2018, I-Mab has successfully completed the Series B and C financings, raising a total of US$370 million. The Series C financing raised US$220 million and is one of the largest Series C financings in the history of China biotechs. The current investors of I-Mab include well-known strategic and venture capital institutions such as C-Bridge Capital, Tasly Capital, Hony Capital, Hillhouse Capital, CDH Investment, Hopu Investment and Ally Bridge Group. The diversified shareholder base demonstrates the investors’ recognition of I-Mab’s experienced management team, innovative capabilities and globally competitive biologics pipeline.

“With pursuit of genuine innovation built into its genes, I-Mab has been focusing exclusively on potentially first-in-class and best-in-class biologics to improve the rate of survival and life quality of patients. I-Mab has clearly differentiated itself among its peers with the ability to innovate as its core competitive advantage,” Wang Xiaojing, Executive Director of Frost & Sullivan China noted.

Relying on its internal discovery capability and integrated R&D platforms, I-Mab has developed a competitive biologics pipeline comprised of a risk-controlled and “fast-to-market” China Portfolio and a transformational Global Portfolio. Currently, I-Mab is rapidly advancing the China Portfolio of late stage clinical assets towards market launch in China and pushing the Global Portfolio towards new clinical milestones in a short period of time. I-Mab is moving toward an end-to-end integrated biopharmaceutical model at a steady and swift pace.

Facilitated by a merger between Third Venture Biotech and Tasgen Bio, I-Mab has rapidly built a highly experienced team with world-class R&D capabilities. The company focuses on discovery and development of first-in-class and best-in-class biologics in the areas of immuno-oncology and immuno-inflammation.

I-Mab has already submitted several IND applications and is prepared to submit additional INDs in order to initiate clinical trials in China and the US, including multiple Phase II and Phase III studies. I-Mab is on a fast track toward becoming an end-to-end fully integrated biopharma company.

In June 2018, I-Mab successfully raised US$220 million in Series C financing, which represented one of the largest amounts ever raised in Series C by an innovative biotech company in China.

Frost & Sullivan is a global leading growth consulting company as well as the biggest growth consulting company in China. The company is uniquely positioned and qualified to help your team create transformational growth strategies to survive and thrive in a business environment experiencing disruption, collapse and transformation. Frost & Sullivan invests considerable resources each year to analyze best practices in innovation and the company brings this knowledge to its client partners.