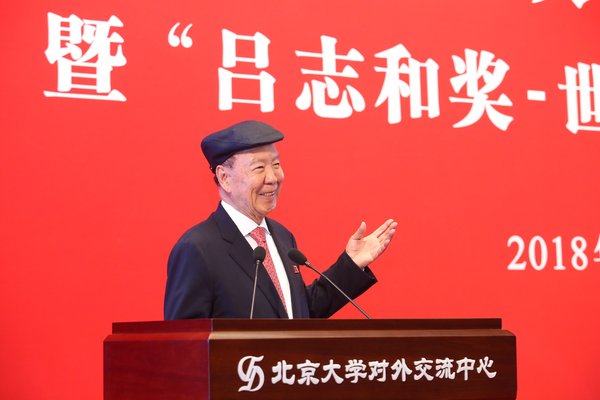 -Teachers and students exchange views on “Facing the World: The Role, Opportunities and Challenges of Promoting Sustainable Development in China”

-Dr. Mo Yan, member of the Prize Recommendation Committee, and Mr. Xie Zhenhua, laureate of the 2017 Award, serve as speakers Dr. Lui Che Woo, Founder of the “LUI Che Woo Prize – Prize for World Civilisation”, shared his experience of hardship in his early life during the opening speech and talked about his support for education. Prof. Lin Jianhua said that he is thankful to Dr.Lui for his support of education and future generations and added that the establishment of the LUI Che Woo Prize reflects Dr. Lui’s broad-minded and profound thinking with regards to the challenges of human development. Prof. Lin Jianhua thanked Dr. Lui for his generous support of Peking University and was deeply delighted and inspired by his forward-looking and selfless dedication. Prof. Lin believes that advocating and establishing common values and visions are the foundations of society and university, which is also the intention of the LUI Che Woo Prize.  Prof. Lin expressed that Peking University is pleased to work with Dr. Lui Che Woo and all people with foresight to help the world understand China, and to let China understand the world with a broader mind and vision, moving towards world peace and a better future.

During the opening speech, Dr. Lui shared his experience of hardship early in his life and talked about his support for education. He believes that becoming a member of Peking University is an affirmation and great endorsement of his 89-year life. The support for the construction of “Lui Che Woo Building” is his appreciation to Peking University, to the country, to the compatriots, and to the world. He is looking forward to bringing great achievement to China in the area of life sciences, cultivating more outstanding talents and scientific research for the betterment of the country and the world. Dr. Lui said: “Let the revival of the five-thousand-year civilized country flourish with a humanistic glory. I know in my heart that this is where Peking University can make a unique contribution.” He believes that the future of Peking University will contribute more Chinese wisdom and spirit to the entire human society. As a “Chinese who has the privilege of doing something in the world,” Dr. Lui suggested: “Keep learning, making progress, embracing the world, facing the future, and creating achievements.”

Inspiring teachers and students to care about sustainable development

Dr. Mo Yan said in his speech that Dr. Lui believes in good faith and good deeds. The establishment of the LUI Che Woo Prize aims to solve the impact of rapid development of materials and technology on morality, thereby improving the relationship between people, and between man and nature, so that individuals can pursue and achieve their goals, cherish and enjoy the beauty of the world, promote social harmony and common prosperity, and provide a better world for future generations. This is the Chinese peoples’ commitment to the world and its contribution to human society.

Prof. Xu Zhihong, former President of Peking University and Dean of the College of Modern Agriculture Science, Prof. Rao Zihe, Selection Panel Member of the LUI Che Woo Prize, Prof. Zhang Dongxiao, Dean of the School of Graduate Studies and School of Engineering of Peking University, and Prof. Tang Chao, Executive Dean of Academy for Advanced Interdisciplinary Studies and Chair Prof. of School of Physics of Peking University, shared their views on the importance of sustainable development during the panel discussion at the symposium, and answered questions from teachers and students. Prof. Xu Zhihong believes that universities should cultivate and encourage students to think about sustainable development. He suggested that every Chinese citizen, especially well-educated citizens, should have such a mindset, starting from oneself, and that this is the only hope for the future of China. Prof. Rao Zihe said that the LUI Che Woo Prize focuses on the overall contribution to mankind through its high assessment requirements and standards. He also said that the Prize will have a greater influence in the international community in the future. Prof. Zhang Dongxiao then spoke about the close relationship between development and sustainability, the prospects for future cooperation in energy development between China and the United States, and the direction of China’s energy structure adjustment.

After the symposium was completed, the guests gathered at “Lui Che Woo Building”, where Prof. Wu Hong, Dean of the School of Life Sciences of Peking University, introduced the “Lui Che Woo Building”. She said that the building will provide an innovative space for Peking University Life Science scholars, where the university will cultivate promising young people to contribute to China and the world, and that it will also serve as a bridge between Peking University and the world’s life sciences. Under the witness of teachers and students, Dr. Lui Che Woo and Mrs. Lui, Mr. Lawrence Lui Yiu Nam, the son of Dr. Lui, representative of LUI Che Woo Charity of the United States, Prof. Lin Jianhua, Prof. Xu Zhihong and Prof. Wu Hong lit a crystal ball and unveiled the “Lui Che Woo Building”, as well as a commemorative plaque for the building.

About the LUI Che Woo Prize – Prize for World Civilisation

Founded by Dr. LUI Che Woo in 2015, the “LUI Che Woo Prize – Prize for World Civilisation” is an annual, first of its kind international cross-sector innovative award for advancing world civilisation and inspiring people to build a more harmonious world. It aims to recognise and honour individuals or organisations all over the world for outstanding contributions and encourages the continuation of that work in three objectives: sustainable development of the world, betterment of the welfare of mankind and promotion of positive life attitude and enhancement of positive energy. For more details, please go to www.luiprize.org.

Dr. Lui Che-woo was born in Jiangmen, Guangdong Province, China in 1929. He established the first K. Wah company in Hong Kong in the 1950s. He is currently Chairman of K. Wah Group. Its major member companies include K. Wah International Holdings Limited, Galaxy Entertainment Group Limited, Stanford Hotels International and K. Wah Construction Materials Limited. Today, K. Wah Group has developed into a multi-national conglomerate, one of Asia’s largest and leading conglomerates involving diversified businesses including properties, entertainment and leisure, hospitality, and construction materials with over 200 subsidiaries and close to 30,000 employees worldwide. The foothold of the business covers Hong Kong, Mainland China, Macau, North America and Southeast Asia. A distinguished philanthropist, Dr. Lui has been particularly supportive of the development of medical care, education and hotel and tourism industries. In 2014, Dr. Lui established a HK$1.3 billion GEG Charitable Foundation to cultivate in the young proper moral values and nurture their sense of belonging to society and the community.

The Prize Company is a charitable company limited by guarantee incorporated in Hong Kong. Nomination and its related work are handled by the Secretariat. The Prize Company is led and supervised by the Board of Governors and is responsible for the daily administration, coordination and liaison with the Board of Governors, the Prize Council, the Prize Recommendation Committee and the Selection Panels to ensure the highest standards of integrity and transparency in relation to the Prize are upheld.