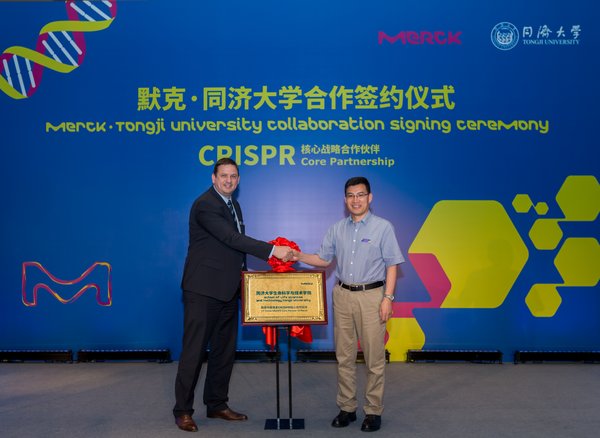 – With membership, Tongji University to get exclusive access to Merck’s genome-editing technology, comprehensive technical support
– University joins a network of 70 CRISPR core labs around the world “We are honored to have Tongji University, an institute known for its stem cell research, as a core partner in our CRISPR program,” said Udit Batra, Member of the Merck Executive Board and CEO, Life Science. “As a core partner, Tongji University will get exclusive access to Merck’s genome-editing tools as well as the opportunity to collaborate with a network of some of the world’s most prestigious labs.”

Under the partnership, Merck will provide Tongji University with CRISPR workflow solutions from assay design and bioinformatics to manufacturing, validation and application testing to further develop the field of genome editing.

“Merck’s CRISPR Core Partnership Program will bring benefits to the stem cell research which we, at Tongji University, are working on,” said Professor Shaorong Gao, dean of the School of Life Science and Technologies, Tongji University. “There is great value in collaborating and sharing knowledge with like-minded gene-editing scientists and experts, which will help advance research in solving challenging diseases.”

The Life Science business of Merck has secured patents in Australia, Canada, Europe, Israel, Singapore, South Korea, and most recently China, covering foundational CRISPR technology. Its CRISPR patents are directed to chromosomal integration, or cutting of the sequence of eukaryotic cells and insertion of a synthetic exogenous DNA sequence to make a desired genomic change. Scientists can replace a disease-associated mutation with a beneficial or functional sequence — important for creating disease models and allowing new gene therapy solutions.

As a company that has been highly involved in genome-editing innovation, Merck recognizes that genome editing has resulted in major positive advancements in biological research and medicine. At the same time, the growing potential of gene-editing technologies has opened scientific, legal and societal concerns. As both a user and supplier of gene-editing technology, Merck supports research with genome editing under careful consideration of ethical and legal standards. Merck has established a Bioethics Advisory Panel to provide guidance for research in which its businesses are involved, including research on or using genome editing, and has defined a clear operational position taking into account scientific and societal issues to inform promising therapeutic approaches for use in research and applications.

For more information on Merck’s work in genome editing, visit:

About the School of Life Sciences and Technology

Introduced in 2014, Merck’s CRISPR Core Partnership Program is the first of its kind, providing a networking platform for genome-editing experts in the Life Science industry, as well as dedicated technical support and collaboration opportunities with Merck’s R&D team. Through the program, scientists at partner core facilities are given exclusive access to Merck’s CRISPR reagents and other innovative products in support of their research.

Merck is a leading science and technology company in healthcare, life science and performance materials. Almost 53,000 employees work to further develop technologies that improve and enhance life – from biopharmaceutical therapies to treat cancer or multiple sclerosis, cutting-edge systems for scientific research and production, to liquid crystals for smartphones and LCD televisions. In 2017, Merck generated sales of €15.3 billion in 66 countries.

Founded in 1668, Merck is the world’s oldest pharmaceutical and chemical company. The founding family remains the majority owner of the publicly listed corporate group. Merck holds the global rights to the “Merck” name and brand. The only exceptions are the United States and Canada, where the company operates as EMD Serono, MilliporeSigma and EMD Performance Materials.