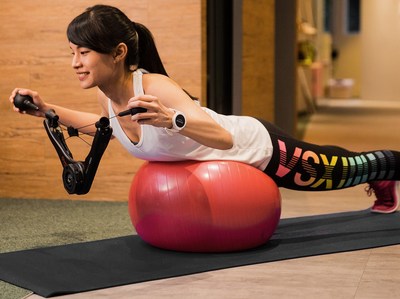 KANSAS CITY, Miss., Aug. 16, 2017 /PRNewswire/ — After becoming the second highest funded Kickstarter fitness product in history, Kansas City-based OYO Fitness has now launched their DoubleFlex Black Portable Gym on the Backer Founder crowdfunding site in Taiwan. The company’s foray into overseas markets will be followed by additional crowd funding launches on other global sites next month. This personal gym features patented SpiraFlex technology which provides the same benefits as weight training. SpiraFlex has been used by NASA astronauts on the International Space Station and in the Bowflex Revolution home gym. A crowdfunding effort for the DoubleFlex Black Portable Gym is now underway in Taiwan.

OYO Fitness has received over $700,000 in orders from backers on Kickstarter, placing it in the top 99.9 percent of all products ever offered on this leading crowdfunding site. Since then, OYO has gone on to raise an additional $226,000 through crowdfunding site Indiegogo, bringing total crowdfunding orders to over $930,000 so far.

On the Taiwanese Backer Founder site, the DoubleFlex Black is available at a pre-order price in two configurations that provide 15 or 25 pounds of resistance and include leg and door attachments for a total body workout. Over 75 exercises can be performed in the comfort of the home, office or on the go.

“Following our success on Kickstarter and Indiegogo, we are thrilled to bring the DoubleFlex Black to other global crowdfunding sites at a discounted price before general distribution to consumers and health clubs in December,” said OYO Fitness founder and CEO Paul Francis. “The overwhelming response speaks directly to consumers’ desire for a fitness product that is both efficient and portable, and that can be used anywhere amid today’s busy lives.” The DoubleFlex Black is available for pre-order in Taiwan at: https://www.oyofitness.com.tw

For US and other countries, the DoubleFlex Black is available for pre-order at:
https://igg.me/at/oyo/x/16092817

The closed Kickstarter campaign can be seen at:
http://kck.st/2lmsXZN

Please visit our website at oyofitness.com and Facebook.com/oyofitness to learn more about OYO Fitness and their products that fits fitness into busy lifestyles.